This device can be used for any continuous alarm equipment powered by 12V, making it into an intermittent working state. It can also be used to control any 12V powered signal light to make it flash intermittently. The general alarm scale is mostly tone-adjusted or intermittent.
The circuit diagram of this device is shown below. In fact, the working principle and circuit structure of this device are the same as the circuit in Figure 7 above, and two NAND gates in the 4011 integrated circuit are used as ultra-low frequency oscillators, and the other two NAND gates are connected in parallel as a buffer shaping stage; The 2N2222 transistor is used as the output amplifier, and the collector current is used to control the controlled siren or bulb. If the current of the controlled siren is greater than 1A, the collector current of 2N2222 is small and cannot be driven, then you need to connect a breaker to drive, and connect the breaker contact in series with the power circuit of the controlled object. The intermittent intermittent time is determined by the product of R1 and C1 in the figure. As shown in the figure, the intermittent time is about 3 seconds. Do not use electrolytic capacitor C1, paper or polyester film can be used. If there is no such large-capacity capacitor on hand, you can use 0.1Î¼F capacitors that can be easily purchased in parallel.
If you want to change the intermittent time, you can change the value of C1 or R1, the larger the value, the longer the intermittent time; the smaller the value, the shorter the intermittent time.
The diode connected in parallel with the breaker or guard is a freewheeling diode, which is used to protect the 2N2222 tube and prevent the reverse high voltage generated by the inductive load from breakdown. If the controlled load is a resistive load, such as a light bulb, this diode may not be connected. The diode can use any rectifier diode with a voltage of 50V or more and a current greater than 1A. 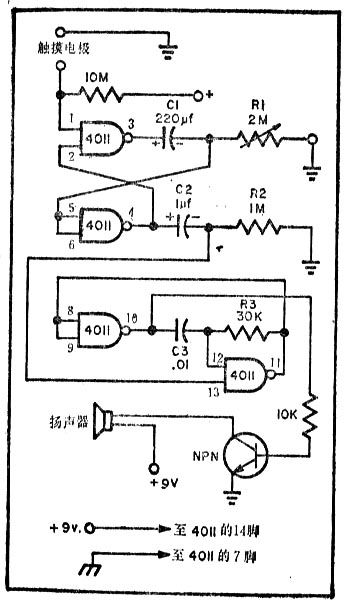