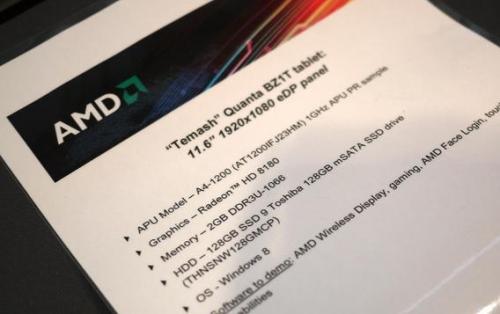 In 2013, AMD followed Intel's focus on the development of the mobile platform. For this reason, AMD officially launched a new Temash APU processor. The processor is mainly targeted at the multimedia entertainment and high-performance tablet market, and also covers some 10 to 13-inch cross-border notebook devices with keyboards. It is reported that the Temash APU processor has achieved a 20% improvement in performance over the previous generation of Bobcat. Compared with the 2012 AMD C-70, the performance of the graphics card has been improved by 212% per watt compared with 172% per watt for the X86 platform.

However, the improvement in performance does not mean that the power consumption also increases. According to AMD official description, this Temash APU processor and the Intel Atom Z2760 processor jointly test results show that although the performance is improved by 2 to 5 times However, the Temash processor can achieve a battery life of over 12hrs, which is 45% higher than a Windows tablet equipped with a Core i3.

AMD also said that this new A-series processor has some extra magical features. First, the A400 GPU can speed up the loading of applications and enhance the playback of high-definition video. A600 GPU brings AMD Screen Mirror function, can display the relevant content of the mobile phone through wireless connection to TV, and refer to a series of new functions such as using webcam for gesture control and AMD facial recognition landing.