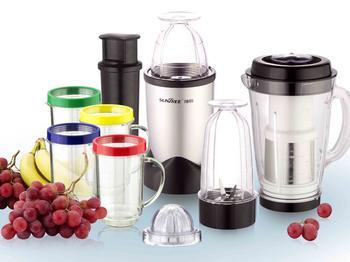 With the improvement of people's quality of life, the types of small household appliances in the market are becoming more and more abundant. Modern international market research company launched the â€œ2012 Chinese Urban Professional Women Home Cooking Small Appliances Researchâ€ in the first and second tier cities across the country by the end of 2012. A total of 1,000 young professional women aged 18-35 from eight major cities across the country were collected.

Rice Cooker: Consumers generally believe that product technology value is low MIMR (Modern International Market Research Company abbreviation) data show that rice cookers have the highest ownership in home cooking small household appliances, 97% of urban households have 1 or more rice cookers. However, behind the high ownership rate, we found that: 1. The usage rate of rice cookers is high, but the exchange frequency is not high. In the sample surveyed, household electric cookers used 45% of the time for more than two years, and the vast majority of consumers replaced new rice cookers when rice cookers were not working properly. 2. The price of rice cookers has not changed much in consumers' minds. Consumers are willing to pay an average of 389 yuan for rice cookers. Even if they need to redeem, consumers do not plan to pay more than 100 yuan for the original product. The author believes that rice cookers, as a household appliance that meets the basic needs of the general public, have a low perceived value of the product: rice cookers are a tool to cook rice quickly; currently, manufacturers are focusing on various â€œhealthy, delicious, nutritiousâ€ and other product concepts. , Consumers do not buy it: They believe that the key factor affecting the quality of rice cooking lies in the rice itself, which has little to do with rice cookers; for such consumer perceptions, manufacturers must increase the product value of rice cookers and locate various concepts. At the same time, it is necessary to match new product technologies as selling points, such as interiors, new smart programs, and even innovative industrial designs. In this way, the overall industry's upgrading and innovation will be reversed, and consumers will feel that the value of rice cooker technology is not strong enough to find a new industry growth point.

Microwave ovens: Consumers are more concerned about high quality and versatile microwave ovens MIMR data show that the occupation rate of microwave ovens for professional women in the first and second tier cities is as high as 83%, but unlike the rice cooker market, consumers are willing to pay an average price close to 688. Yuan, and said that when the new microwave oven is redeemed, the budget will rise to around 800 yuan. The author believes that the difference between induction cookers and rice cookers lies mainly in the value positioning of products: the product positioning of microwave ovens is to improve the quality of life, and easy to complete the cooking work. This positioning is precisely aimed at the needs of office workers who are now living at an increasingly fast pace, and they are also willing to pay higher prices to ensure the high quality and versatility of their products. Therefore, manufacturers can focus on improving product quality, developing new product uses, and cooperate with a good after-sales service system to increase consumer brand loyalty.

Yogurt makers and bread makers: Consumers believe that the process is complex and time-consuming. It is faster and more convenient to be a small-funded new small household appliance. The yogurt machine is not widely used in professional women's families, and the market prospects are not yet clear: MIMR data show Even if there are professional female households in first- and second-tier cities, the household ownership rate is only about 10%, while the idle rate (basically not used) is as high as 30%. Due to the fact that yoghurt itself is more oriented to the nature of nutritious foods rather than staple foods, coupled with the fact that the time of eating is generally concentrated in the afternoon or after dinner, and the production process is complex and time consuming, it is doomed that the main group buying yoghurt machines likes to drink yoghurt and have free time. A crowd of people who do their own food making time. From the current point of view, it is unlikely that the expansion of the target market size, so manufacturers should focus on reducing the idle rate and increase the yogurt machine users of the second purchase rate. During MIMR's in-depth excavation of consumer demand, it was found that the main reasons for the idleness of yogurt makers were the complex and time-consuming process of disinfection, fermentation, and mixing, while the yogurts purchased in supermarkets were convenient, with a wide range of tastes and options. Drink, in the case of no significant difference in price, consumers naturally prefer to buy directly. Therefore, the key to reducing the idling rate of the yogurt machine is to accelerate the production of yoghurt. Second, the production process is intelligent and automated. At the same time, it is also necessary to simplify the cleaning work after using the product.

Similar to the yogurt machine, the bread machine is currently facing the predicament of low market retention and high idleness. In second-tier cities such as Suzhou, Chengdu and Xiâ€™an, 71.4% of respondents said that although there is a yogurt machine at home, they are used less than once a month. However, unlike the yogurt machine, the future target market for the bread machine must be broader. The main reason is that bread itself is a staple food, and it is a good part of the breakfast choice for school/office workers. The most important reason for impeding consumers to buy/stand idle breadmakers is that the production process of the breadmakers is too time-consuming to meet the needs of consumers for making breakfast: it is quick and easy. In order to expand the market size and reduce the vacancy rate, the future breadmakers should design the function of the bread machine according to the needs, timing, and characteristics of the consumers to make/eat breakfast, making it an effective breakfast solution.

EASY TO ATTACH - These bright Bicycle Lights are easy to attach on/remove of any vehicle. During the week use them on your city bike while in the weekend you can go cruising on your mountain bike


LONG LIFE QUALITY - This simple but efficient design is made of high quality waterproof silicon for a longer lifespan. The premium quality material used will protect them from damaging quickly!


VISIBILITY FOR SAFETY - Bicycle Lights are very bright, making you visible to others. Plus they provide you with a view on obstacles that lay ahead. Creating safety during your nightly escapades!


SATISFACTION GUARANTEED - We Provide High Quality Products. Our team is always ready to help you get the most out of your product accessories. 100% Satisfaction Guaranteed!