March 14, 2020
In 2012, the LED industry was overcapacity, and many LED companies sought to break through. Through in-depth analysis of the LED industry, network marketing organizations believe that the future of the LED industry is still bright. At this stage, the breakthrough of enterprises must first accelerate product research and development, reduce costs and improve competitiveness, followed by innovative marketing models.

Product development and improvement is not a one-off event, but the innovative marketing model can be done immediately. Comprehensive analysis of all marketing channels, brand network broadcast combined with more than 10 years of network marketing experience analysis: The best breakthrough in the LED industry lies in network marketing, and this analysis results coincide with the views of the industry: "The LED industry needs new Development model to promote industrial transformation and upgrading. In response to the changes in the sales model brought about by the development of information and Internet technologies, traditional enterprises should actively open up e-commerce channels." According to the huge and multi-faceted LED hot-selling products of Taobao platform, LEDs have been confirmed from the side. The feasibility of the industry to enter the e-commerce platform. In addition, according to Taobao Tmall's LED sales data, Philips, NVC, Panasonic and other companies that are good at network marketing have become the leader in LED network sales. 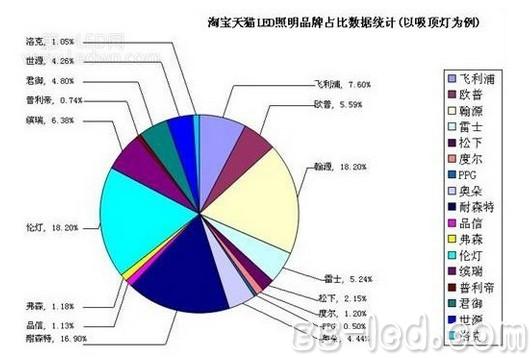 (The proportion of products sold by LED merchants online)

The traditional LED marketing model is mostly sold by lighting stores, and this sales model has strong geographical limitations. Internet marketing not only has no restrictions in this respect, but its information globalization can promote the brand influence of enterprises to spread to the whole world, which precisely meets the new trend of China's LED industry export development. Not only that, the rise of the LED network marketing model is largely influenced by changes in the consumer population. According to Baidu Index analysis, LED is mainly concerned with people aged 20 to 40.

Compared with traditional offline channels, e-commerce channels promote lower product costs and faster information flow. Not only that, but after the 80s and 90s, the Internet generation gradually became a consumer group, and the way to receive information was mostly the Internet. However, at present, more than 95% of the traditional lighting channels in China do not sell LED lighting products in large areas, and a small number of online platforms sell only a few brands of LED bulbs. Faced with the shortage of channels, many consumers who have demand for LED lighting can only turn to the Internet to find products, which promotes the enthusiasm of LED light online shopping, and the customer's Internet search habits make the LED online shopping field contain unlimited business opportunities.

When the e-commerce trend became clear, many LED companies began to lay out network marketing. At the beginning of 2013, in addition to dealers, engineering, and specialty stores, the LED channel war has added a new channel, namely, e-commerce platform, such as: Tsinghua Tongfang, Zhouming Technology, Shangyu Lighting, etc. Lighting companies that have transformed from traditional lighting, such as Foshan Lighting, NVC Lighting, and Sanxiong Aurora, have focused on the e-commerce platform. Some insiders said that the development of network channels is the breakthrough for the LED industry to achieve overall transformation and upgrading, and 2013 will be a new era for the LED industry to enter the Internet marketing.

During the prevalence of e-commerce, many LED companies began to set up their own network marketing team to build their own sales websites or settle in e-commerce platforms. Even so, many companies have finally found that the effect is minimal. The self-built network marketing team has a series of problems. The main problem is that it takes a long time to build a team that can really help the company to conduct Internet marketing, and the cost is extremely large.

(This article is reproduced on the Internet. The texts and opinions expressed in this article have not been confirmed by this site, nor do they represent the position of Gaogong LED. Readers need to verify the relevant content by themselves.)