The Jiangxinyu Scenic Area is located in the middle of the Lijiang River in the north of Wenzhou City. It is in the shape of east-west, north-south narrow, with a total area of â€‹â€‹about 70,000 square meters. Jiangxinyu is one of China's four famous scenic spots, a national 4A-level tourist area. The beautiful scenery, historical sites and rich cultural landscapes of the island are a shining pearl on the Lancang River, which has always been called â€œLijiang Penglaiâ€. In order to fully develop the night resources of Jiangxinyu, Liangye Lighting undertakes the engineering design and construction work of Jiangxinyu Light Show.

"Light show" is a kind of light art expression that uses light scenery and background music to convey humanistic ideas and express artistic conception. It gives people a visual and audio-like visual effect and auditory feeling.

Jiang Xinyu's "Light Show" is based on the twin towers. It is arranged between the East and West Towers. It uses light performances to embody the "beautiful legends", "the children of the children" and the "Donghai era". Meaning, total length of 9 minutes and 45 seconds. They are accompanied by the Wenzhou original ecological folk song "Dangdang", Beethoven's "Symphony of Destiny", and the transition from the piano concerto "Yellow River" to the so-called background music of the orchestral "Red Flag". At the same time, the whole process of the "Light Show" performance is equipped. Explain so that the audience can better understand its meaning.

The first chapter, "The Legend of Beauty," uses narrative methods to tell the history of Jiangxinyu and Wenzhou. The 7 sets of large-scale led special light-carved white deer hidden in the canopy form the opening ceremony of the "White Deer Run" scene, which is accompanied by the folk songs of Wenzhou. It tells the story of the white deer, the beautiful legend of the ancestors building the city, symbolizing the rise of Wenzhou. The 24 sets of discolored air rose lights (yellow and white) under the double towers of the east and west form the "double towers of the gods", and the two sets of aerial swords and staggered movements represent the "double towers", telling the construction process of Jiang Xinyu after thousands of years.

The second and third chapters, "The Children of the Children" and the "East Sea Times", depict the glory and bright future of Wenzhou today with large-scale lighting performances. The main light consists of 21 sets of high-power computer lights arranged on the riverside, symbolizing Wenzhou in the 21st century. The lighting is arranged at a distance of about 10 meters. The computer has 12 channels, CMY is infinitely tinted, DMX512 interface, single beam, and the light source is 4000w. High-efficiency xenon lamp. The projection angle is 30 to 45 degrees on the opposite side of the river. This can increase the intensity of visible light on the opposite side of the field, and also make the visual impact of the light show stronger.

The interior of the Jiangxin Temple and the back of the center use the color-changing air rose lights to form the "Temple of the Temple", which is the background light for the main performance lighting, forming a brilliant background. In addition, combined with ancient architecture, tree lighting, river embankment led contour lights running changes, river embankment fence lighting and other lighting elements of the centralized control, together form a magnificent light show. Make this pearl on the Lijiang River more famous, and achieve the perfect unity of environment, art, atmosphere and style. 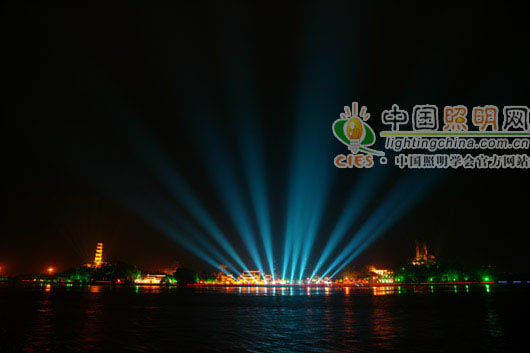