A hotel real video on demand system based on DM-V112 video server?

May 22, 2020
[Abstract] The performance and market economy practicability of the DM-V112U / E small video server of JVC Company are analyzed, and a hotel real video on demand (TVOD) system using the video server is proposed.
Keywords: Video Server Video on Demand DM-V112

VOD (Video on Demand) is a hotspot technology in contemporary multimedia application technology. It uses an intelligent two-way network to achieve interactive high-speed digital image transmission, which greatly promotes the development of multimedia technology. At present, the technology is relatively mature, but due to its huge infrastructure investment costs and high user costs, it has not been able to be widely applied. At present, VOD is mainly used in distance teaching, hotel service industry and some departments. As the core of the VOD system, the performance of the video server directly determines the overall performance of the VOD system. The DM-V112 series of JVC in Japan is a small-scale video server with superior performance, which is currently mainly used in the hotel industry.
1 Features of DM-V112U / E video server
1.1 Structure of DM-V112 video server A DM-V112 server has: 3 SCSI (small computer interface) hard disks; with 12 pairs of AV output channels, which can output 12 different programs at the same time; with one pair AV monitoring port; two standard AV decoder boards (connected to channels 1 ~ 6); two Optical Fiber AV decoder boards (connected to channels 7 ~ 12). The server has a total of eight RS-422 serial communication card control (video data stream) ports; when needed, it can also be connected to an external hard drive, up to 12 hard drives. The number of hard drives used can be determined according to the richness of the program source. Similarly, video servers can also be connected in series, and the number of servers and channels required can be determined according to the number of users. Because the hard disk program storage uses a redundant array, the reading speed is very fast.
1.2 The performance index of the DM-V112 video server (1) The maximum number of users under single-use conditions: 1000 users (multiple servers can also be connected in series as required)
(2) Number of users who choose the same program: 12 to 128;
(3) Response time: enter (exit) system <5 seconds; other <0.5 seconds;
(4) Maximum number of programs: 21 to 150 hours;
(5) Image quality: MPEG-1, resolution is 352 Ã— 288;
(6) Wiring: the upstream network is a telephone network, and the downstream network is a closed-circuit television network. (Currently a more applicable plan).
1.3 Connection with the control computer The DM-V112 video server requires a control PC to complete functions such as section entry and state switching. The connection between the PC and the server is shown in Figure 1.

In Figure 1, Converter refers to the conversion device between the RS232C port of the PC and the RS485 port of the video server. The control signal of the PC must be converted into the RS-485 interface of the DM-V112 server through the converter. Similarly, the status information of the DM-V112 server is converted into the RS-232C interface of the PC through the converter, thereby achieving communication between the two parties.
1.4 Computer control of the video server (1) State switching of the video server The DM-V112 video server has two states, namely Submode (playing) state and Authoring (production) state. Call the editing function from the Submode state to enter the Authoring state, and return to the Submode state after initialization from the Authoring state.
It should be noted that in the Authoring state, the power supply cannot be cut off at will, otherwise, the data in the server hard disk will be damaged.
(2) Conversion of the program Type the command at the DOS prompt:
mva <Source File> <DesTInaTIon File> is sufficient. Among them, <Source File> and <DesTInaTIon File> respectively represent the source file to be converted and the converted target file.
(3) Entry of the program Entry of the program must be performed under the Authoring state. Run the command Auth, select the server hard disk to store the program in the corresponding window, and drag the program to be stored into it to automatically execute it. After all the programs are saved, return to the playback state.
2 A hotel real video-on-demand system based on DM-V112U / E. This hotel real video-on-demand service system consists of source, channel, and sink, and corresponds to the three parts of the front-end computer room, closed circuit television network, and guest room of the hotel. The system uses the existing cable TV network and telephone exchange in the hotel to realize automatic video on demand in the guest room. The system structure is shown in Figure 2. 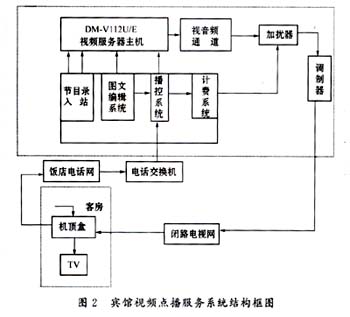 2.1 The front-end computer room part (1) enters and enters the TV program in the section directory, and can store various film sources (tape, LD, VCD, etc.) after real-time digital compression to the hard disk of the DM-V112U / E video server for users On demand.
(2) The rich subtitle and special function of the graphic editing system can edit and produce graphic screens and audio and video programs.
(3) The video server accepts the commands from the broadcast control system to control the broadcast of the program; connects to the recording workstation to update and maintain the program source.
(4) Broadcast control system The broadcast control system adopts a certain control algorithm to accept or reject the user's on-demand request. When the user's request is accepted, the system issues corresponding operation instructions, such as control Whether the corresponding image signal is scrambled, and the descrambling authorization is given to the on-demand users. Through the DM-V112 bottom control protocol, the program can be paused, looped, fast forwarded and reversed. This type of control has passed the VC ++ programming test.
(5) The billing system can complete such as customer account opening, on-demand authorization, on-demand settlement, statistical reports, etc. by connecting with the management information system of the hotel or connecting the system host separately.
(6) The video scrambling equipment scrambles the toll channel images and performs data encoding processing to transmit addressable authorization information.
2.2 Uplink channel and downlink channel The system uses the hotel's original closed-circuit television network and telephone network, which is based on the following analysis:
Considering the bandwidth requirements of VOD systems, HFC is relatively better. At the present stage, a feasible solution is to use CATV of broadcasting and television as the downstream channel and PSTN of telecommunications as the upstream channel to realize VOD. This makes full use of existing resources, on the other hand, it also saves the two-way reconstruction cost of CATV network, while avoiding the HFC "funnel effect" and other difficulties. However, in this downlink channel scheme, the number of users who can simultaneously provide services will be limited by the number of channels. Another solution is to directly lay the video and audio cables from the video server channel to the TV in each guest room inside the hotel. This solution is relatively expensive and the resource utilization rate is relatively low.
2.3 Each guest room is equipped with a user set-top box, which is a key technology in the VOD system. As a terminal of an interactive television system, its role is to accurately and reliably demodulate the downstream digital video signal, process the upstream signal and provide a friendly interface for the user. Its components are: digital tuner, asynchronous transfer mode (ATM) processing unit, asymmetric digital subscriber circuit (ADSL) interface / HDSL interface / HFC interface, image and sound decompression, NTSC, PAL, SECAM or RGB encoding , Two-way path interface, remote control interface, memory control interface and expansion interface. Guests can complete the video-on-demand control and TV reception control through the hotel's closed circuit TV system and the internal telephone system to connect the system host. In addition to all the functions of the 870MHz on-board converter, the set-top box can also realize the straight-through of the non-scrambled normal video signal, and check the authorization to descramble the scrambled TV signal.
3 Conclusion The video on demand system of most hotels is quasi video on demand. The trick is to use multiple playback and delay (stagger) the starting point. For example, every time it is delayed for ten minutes, the video on demand will look like Elephant just started. In such a system, the user does not actually broadcast the program at the actual location, but chooses to watch the program that has been broadcast. In this way, due to the introduction of a certain delay time, the sharing of system resources can be improved, thereby reducing the cost of the system and reducing the difficulty of system technology implementation. The hotel on-demand system using the DM-V112U / E series video server is a real video on demand, and the response time is greatly shortened. The interaction between the user and the system is greatly improved, which can really increase the interest of customers; the system uses this small video server, the technology is easier to implement, and the cost is relatively low; when the set-top box function is perfect, real-time control of the program can also be achieved through the remote control. And the uplink and downlink schemes adopted by this system are more practical and feasible. However, because this system uses the CATV system, the number of on-demand users is limited by the CATV transmission bandwidth. This system has low investment, superior performance, extremely economical practicability, and broad market prospects.

The roll out of fibre-to-the-home (FTTH) networks has been of global importance since the early 2000s, requiring a dedicated Single Mode Fiber cable Recommendation.

As today`s FTTx networks push optical fiber to single-family homes and multiple dwelling units, they require smaller distribution cabinets and compact fiber management systems, where fiber is subject to a greater degree of bending. These conditions have put more stringent demands than ever before on the bend performance of single-mode fibers. However, the need to maintain a very high degree of mechanical reliability hasn`t changed. An understanding of the design and performance of bend-optimized fiber will help the user make a more informed decision in specifying a fiber that can support tighter bends but still be very reliable 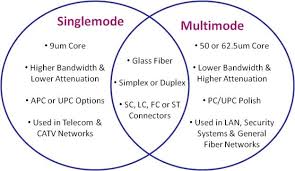 Bend insensitive (or Bend optimized) fiber is designed for use in FTTx and premises applications to minimize the effects of increased attenuation resulting from macrobends and microbends in single-mode fiber. Optimized bend performance is valuable in many cable and connectivity applications including low-count cables, small enclosures, or any application where small bend radii may be encountered. Bend-optimized fiber, The bend insensitive optical fibres can be coiled into a 10 mm radius loop with 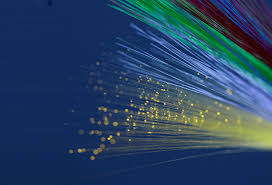